Gov.UK Covid-19 precautions relevant to the venue, will be observed at all NDSAC diving and social events.

In April 2020 the NDSAC will be diving the shallow waters off Kimmeridge with a view to spotting (& photographing)
Undulate Rays as part of the Undulate Ray Project (as featured on BBC’s  ‘Blue Planet UK’ programme).

These rays are on the ‘Endangered ‘list and were thought to have vanished from the UK waters.
Recent pioneering work by Martin and Sheilah Openshaw has shown that their numbers have increased in a few sites off the Dorset coast.  One such ‘hot spot’ is off Kimmeridge bay. 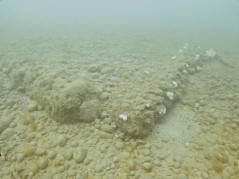 We are very lucky as a club that a licensee of this historic site is a club member,  this enables us to dive with him on this collection of historic cannons off the Chesil Bank, which is a designated protected site.
There are many rumours as to what wreck they were from…. The most interesting is that they came from the Hope (or De Hoop) a Dutch East Indiaman, which was allegedly loaded with ‘specie’ or valuable coins and metals.

This is a protected site and the licensing agreement specifies that NOTHING must be moved or removed from this site!!

For information on the Chesil Cannon Sites contact: www.nauticalarchaeologysociety.org 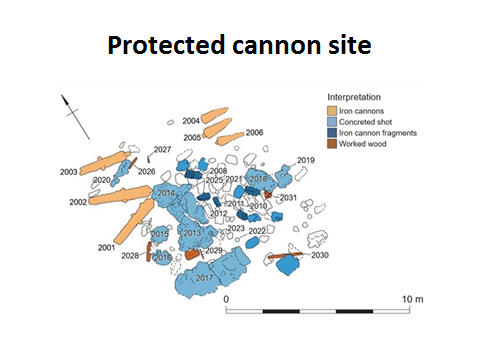 Dive into history on the M2 Submarine! 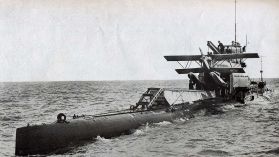 The M class were WW1 prototype submarines, which were originally designed as being powered by steam (complete with collapsible funnels!)   Funnily enough this design was NOT a brilliant one!
Also as the WW1 came to an end, there was even less of a market for a steam powered dead ducks!

Luckily the Admiralty had another amazing idea…. Hey!  Why not make an underwater aircraft carrier!   So they fitted a better engine & put a baby-sized hanger behind the conning tower.
This was to fit a tiny seaplane which was launched via a steam-powered catapult , then the sub submerged & presumably came back up to crane the plane back into the sub after its flight.
At least that was the idea!   Unfortunately they were faster at submerging than closing the hanger doors!!!  You can guess why it is where it is!     Actually this was a most dreadful accident as the whole crew lost their lives and the wreck is a designated war grave, so must be treated with respect.

It is also 32..35 m deep, so not for the faint hearted or in experienced diver.   But it is still a most interesting and atmospheric dive! 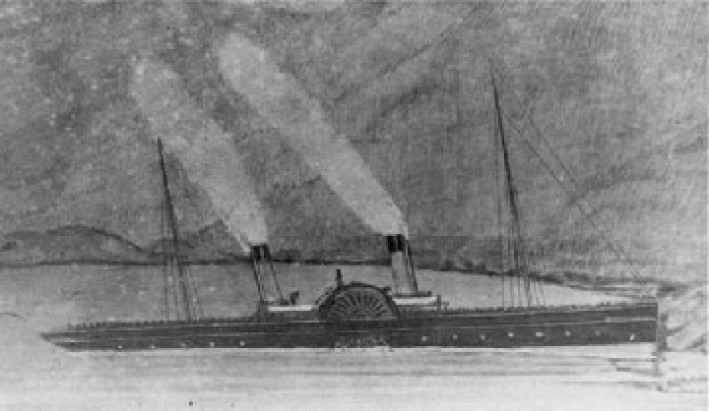 NDSac has adopted the PSS The South of Ireland as part of the NAS ‘adopt a wreck’ scheme. This entails the club having a special interest in surveying, recording and researching the story of a wreck, structure or marine object. Consulting the list of our local sites, it was clear that very few were left unadopted. So here we have a shallow wreck which is infrequently visited but has strong ties to our locality and social history. A project for any club members interested.

The SOUTH OF IRELAND, an iron, paddle steamer belonging to the Great Western Railway had been running a regular route between Cherbourg and Weymouth carrying passengers and cargo. She left Cherbourg at 7:25 on 24th December 1883, en-route to Weymouth with a crew of 23, one passenger and 58 tons of general cargo. Her captain, William Thomas Pearn had worked for the line for 16 years, the later three as Master.

The weather was fine and clear, as they proceeded at full speed, varying to half speed as they struck several banks of fog. Finally, they saw what they thought was a fog bank only to realise that this was land. Despite efforts to bring the ship round, there was too little time and at 1 a:m she struck Waggon Rock, under the steep Gad Cliffs, close to Worbarrow Tout.

On examining the extent of the damage, it was found that the bow area was filling with water and there was little hope of getting her off the rocks. A boat was sent to Weymouth for help with some of the crew and the passenger, a Mr. Blackman of the Marino Hotel, Weymouth. Getting to Weymouth was no mean feat through heavy fog without a compass. They hugged the shoreline and not until the men in the boat found themselves at Durdle Door were they able to take their bearings and eventually find Weymouth Harbour.

The South of Ireland was stuck fast and broke her back at about 7:30 a:m on Christmas morning. No alarm had been raised by her failure to arrive in Weymouth as delays due to the thickness of the fog were expected.

The only vessels available in Weymouth set off in response; the Princess steam launch first and the steamer Prince, which had been laid up for winter, soon followed. Two tugs which were usually dispatched were assisting elsewhere. Eventually locating her in the fog, the decision was made ‘to strip the saloon of her handsome furniture’. That, and the gear from the deck were loaded into barges and the rescue boats began their return.  Meanwhile anxiety was mounting in Weymouth as the dense fog continued. In fact, the Prince was not sighted until early evening when she eventually found Preston.

A basic crew were left to be taken off later by the tug Aguila. A salvage operation was quickly undertaken as the weather was fine. About 80 % of her cargo was subsequently salvaged with use of pumps, and the boilers and engine planned for removal. The South of Ireland herself was a total wreck and later slid off the rocks and lies in 7 to 10 Meters.

The Board of Trade enquiry details the ship’s journey; the final verdict was that the skipper ‘had neglected all the ordinary and proper precautions’ and described By Mr Nelson, speaking for the Master as, ‘The old story of familiarity breeding contempt.’ As a result, Captain Pearn conceded an error of judgement and, in lieu of his long service and otherwise clean record, was demoted to First Mate for three months.

It is likely that little remains of the wreck due to salvage, time and the sea but it is lying amongst large boulders in an attractive area for sea life. We hope that it will offer us the chance to explore, map the area in terms of wreckage and sea life and record what is there for posterity.+

PSs The South of Ireland

Built in Renfrew by William Symonds & Co, in 1867 at 502 tons gross, 214 net register, 200 horsepower with a 2 Cylinder Oscillating steam engine driving the paddles. She was owned by Ford and Jackson and deployed on their Milford to Cork route, hence the name. She was a twin-funnel sister to the PS Great Western. In 1872 she was purchased by the Great Western Railway and transferred to the Weymouth to Cherbourg service.

Are you interested in strange and unlikely marine creatures? Then Bonellia viridis, or the Green Spoon Worm, may be the one for you.  It looks unlike any worm or spoon that I have ever seen and neither does it look green, at least to me.

Its sausage shaped body remains buried in seabed gravels and what is seen is the ‘throat’ and a split mouth which can extend 15cm (10 times its body length) moving around between rocks and in crevices. When disturbed it retracts its mouth by rolling it up…. So quite difficult to spot!

We first saw these on a dive between Fuerteventura and Lanzarote many years ago and were excited to see a number on a dive in the Isle de Medes Marine Reserve, N Spain, this year.

It feeds on detritus, but its skin also has a poison which can paralyse small animals.

What we see are always female, because this spoon worm is unusual for its extreme sexual dimorphism. Females are typically 8 cm (3 in) in body length, excluding the proboscis, but the males are only 1 to 3 mm (0.04 to 0.12 in) long, and spend their adult lives within the uterus of the female.  A young individual which settles away from others of its kind almost always grows into a female. On the other hand, if it settles on or near a female, it attaches to the mouth, develops into a male and gradually makes its way inside the female.

That’s probably enough of that…but in certain parts of the world, which shall remain anonymous, they are called Fat Innkeepers and eaten!

The compressor is available for both air and Nitrox. Contact committee members for details. 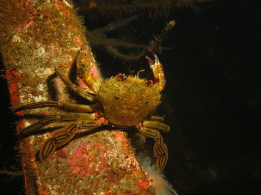 In response to BSAC's interest in club projects, it has been suggested to the committee that Ferry Bridge Diving could provide us with an all season project on marine life, photography and local history. A project outline has been registered with BSAC as a Club Conservation Project.

Click above to see details on our new NDSAC Projects Page 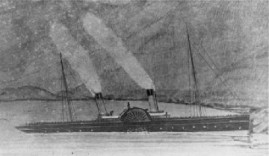 PSS The South of Ireland.

A brief histopry is available on the website Blog.

Want to join us?

If you'd like to become a member, or to find out more, please use email or call in to see us or  simply use the form on our contact us page